The F20 Foundations Platform is an alliance of over 40 foundations that have joined forces in order to further shape the political discourse on future sustainability measures. At the July 2017 G20 Summit in Hamburg, the Platform called for common and transnational action towards a zero-carbon economy and the successful implementation of the 2030 Agenda. Further, the Foundations Platform aims to highlight the strong role civil society is playing in this transformation. Shakti Sustainable Energy Foundation (Shakti) is a member of the F20 Platform Steering Group.

A few days before the 2017 G20 Summit in Hamburg, the F20 platform hosted a high-level event where the F20 participants presented a joint report titled, Renewable Energy, Climate Action and Resilient Societies: Accelerating the Global and Local Paradigm Shift, to the German Government and the G20-Presidency. This report presents the emerging transition towards efficient and renewable energy systems at the global level and in specific G20 nations. 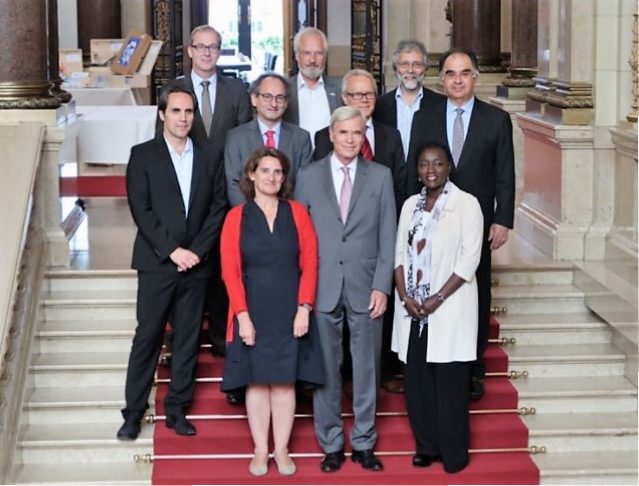 The participating foundations initiated a broad dialogue on the obstacles to the implementation of the NDCs and called upon the G20 nations to confirm their commitment to climate action – with or without the US. Eminent speakers included Lord Nicholas Stern (Economist), Manuel Pulgar-Vidal (Former Minister of the Environment of Peru, now Head of Climate and Energy at WWF), Amory Lovins (Chairman and Chief Scientist of the Rocky Mountain Institut, USA) and Kurt Bock (Chair of the “Energy, Climate & Resource Efficiency” taskforce, CEO of BASF), among others. The chief guest was Barbara Hendricks, Germany’s Minister for the Environment.

Mr. Krishan Dhawan, Chief Executive Officer of Shakti joined a panel discussion on the role of civil society and foundations in the global transformation. He pointed out that “one of Shakti’s roles as the only foundation actively working in the clean energy and climate change space has been to build up the civil society ecosystem by helping existing NGOs create capacity and capability in areas relating to clean energy or helping new NGOs setup.” Reiterating the relevance of the F20 Platform, he stated “Shakti looks forward to working with like-minded foundations from across the world to help forge low-carbon and sustainable pathways to development. Given India’s growing population, current low levels of per capita energy consumption and urgent development needs, such efforts are very important from both national and a global point of view.”