The Road Ahead from Glasgow

For nearly three decades, the UN has been bringing together countries for global climate summits, known as COPs, or the ‘Conference of the Parties.’ In that time, climate change has gone from being a fringe issue to a global priority. If no action is taken, climate change may transform now-familiar terrain into alien landscapes over the next few centuries. This is why summits like the COP focus particularly on the impact of climate change on the planet: rising GHG emissions, heat stress, failing crops, changes in land use and vegetation and others.

What Cops Do For Climate Action

Climate impacts are visible everywhere. We are hitting new records every year, and the most recent IPCC report confirms that we need to correct our emissions trajectory immediately.

The Conference of the Parties (COP) and by extension the Paris Agreement and the UNFCCC process, puts climate on the global negotiation table once a year to create a collaborative framework for governments to tackle the climate crisis. This is a slow-moving process yet an absolutely necessary part of the solution.

A crucial aspect of COP beyond the negotiations themselves is the strong, powerful, interdisciplinary community of organizations and individuals who bring their experience from creating change at their own level to COP to support and influence the negotiation process. They learn, share, and contribute their knowledge to the agenda items being discussed, push for more ambitious, inclusive, and fair outcomes, and collaborate on projects on the ground.

The huge increase in attention to issues of diversity, inclusion and engagement of marginalized groups in decision-making processes over the past few years has helped move the climate needle in the right direction at global and local levels.

From Madrid To Glasgow

COP25 in Madrid was mired in the politics of low ambition and there was widespread disappointment that no overall consensus was reached on increased climate action. Even as differences between governments were evident, the larger question of dealing with carbon credits to offset emissions and, more importantly, the issue of providing aid and support to vulnerable and poor countries for loss due to climate change, was not addressed adequately.

The clock was ticking, and to have a chance of limiting the rise, the world needed to halve greenhouse gas emissions by 2030. This gigantic task was one that leaders attending COP26 had to grapple with—through bold, time-bound and front-loaded plans to transform their economies to reach net zero emissions.

Already delayed by the COVID-19 pandemic, COP26 was held in Glasgow a year after countries were expected to update their emissions reduction targets in light of the latest science, under the Paris Agreement. Most countries, but not all, have done so.

At COP26, nations agreed on the Glasgow Climate Pact, which states that carbon emissions will have to fall by 45% by 2030 to keep alive the 1.5°C goal, but they still fell short of the action needed to keep global warming within manageable levels. Here are some of the key take always from COP26.

COP26 : India In The Spotlight

India has always had an important role to play in COP negotiations but at COP26 announced far-reaching ambition on a scale of never before. Here is a snapshot of PM Modi’s five-point plan or panchamrit: 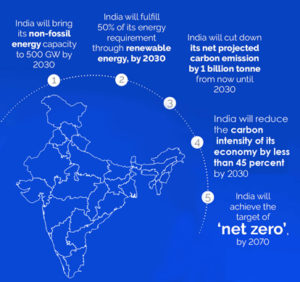 India’s stance, however, wasn’t always this clear. Just a few short months ago, on more than one occasion, India politely declined to pledge net zero emissions, arguing that countries should instead deliver on the promises they had made in the past.

Practically speaking, India’s commitment of net zero means phasing out coal, which fuels 70% of our electricity, switching to electric vehicles, decarbonizing polluting industries like cement and steel, creating forests to absorb carbon dioxide, and installing more solar power plants, all in the next few decades.

COP26 provided India with an opportunity to align more closely with the interests of the climate-vulnerable countries, and use its position to push for stronger provisions on climate justice and climate finance for people of the Global South. They, like India, are facing the impacts of a climate crisis caused by the historical emissions of rich countries. Hopefully, India will take a more pro-active role at next year’s COP to push for a stronger mandate on climate justice, finance and loss and damage funds.