Why Energy and Climate Change

Energy and climate change are at the forefront of the many challenges being faced by India today. India is one of the fastest growing economies in the world. At the core of this growth is the question of energy—more precisely our overall energy consumption and our reliance on fossil fuels—which has led to rising GHG emissions and a warming climate. The resulting impact on climate poses severe risks for India’s economy, ecosystems and human health. How can India transition to a low-carbon future?

In curbing emissions and adopting clean energy pathways, India has advantages, especially the upliftment of the living standards of the population driven by improved access to transportation, cooking fuel, comfort heating or cooling and access to modern energy services. Greater access to clean energy will fuel new jobs and create a dynamic new economy.

But how can India transition to a low-carbon economy? When compared to developed countries, India’s development trajectory has been very different. Most developed countries have relied on an economic development model where growth was coupled with the consumption of fossil fuels. In India, GHG emissions are only two tons per capita, amongst the lowest in countries. There is also a huge developmental agenda to provide quality of life to millions of people. Studies indicate that for India to achieve its stated net zero ambition by 2070, emissions will peak at about 4–5 tons per capita. India has the important opportunity to  adopt a different development model, where it can “decarbonise as it develops.” The falling costs of clean technologies and the immense renewable energy potential provide impetus to this approach.

If We Do Not Take Action…

If left unchecked, climate change will undo a lot of the progress made over the past years in development. It can also exacerbate, as we are already seeing, frequent and extreme storms, unprecedented heatwaves and threats such as food and water scarcity.

A possible reversal of development gains made by India:

Poverty
The combination of rising cereal prices, declining agricultural productivity and the slower rate of economic growth because of climate change could increase India’s national poverty rate by 3.5 per cent in 2040 compared to a zero-warming scenario. This equates to around 50 million more poor people than there otherwise would have been in that year.

Sea Levels
Global sea levels will continue to rise posing a significant threat to over 560 million Indian living along India’s coastline. For instance, across six Indian port cities—Chennai, Kochi, Kolkata, Mumbai, Surat and Visakhapatnam—28.6 million people could be exposed to coastal flooding if sea levels rise by 50 centimetres and the assets exposed to flooding will be worth about USD 4 trillion.

Heatwaves
Many cities reported temperatures above 48 degrees in 2020, which affects both health and labour productivity

A Future Underscored by a Just Transition

At the heart of the clean energy transition is the opportunity for a sustained commitment to equity, justice, and inclusion. The nature of the Indian economy, where informal workers account for 90 per cent of the workforce, requires that the re-invention of energy pathways be a socially responsible exercise. Around 1.2 million people are employed in India’s coal sector, and additionally, a large unaccountable informal economy is attached with the coal sector that heavily depends on it for livelihood. The question of a “just transition” therefore becomes extremely important—not only to help protect India’s most vulnerable populations from climate impacts, but also to create job and alternative livelihoods opportunities for communities and people affected by the decline of fossil-fuel dependent industries.

The science is clear. The coming decades are the planet’s last chance to keep global warming below 1.5°C before the end of the 21st century. Countries will need to take drastic and immediate steps to tackle the most catastrophic impacts of climate change. 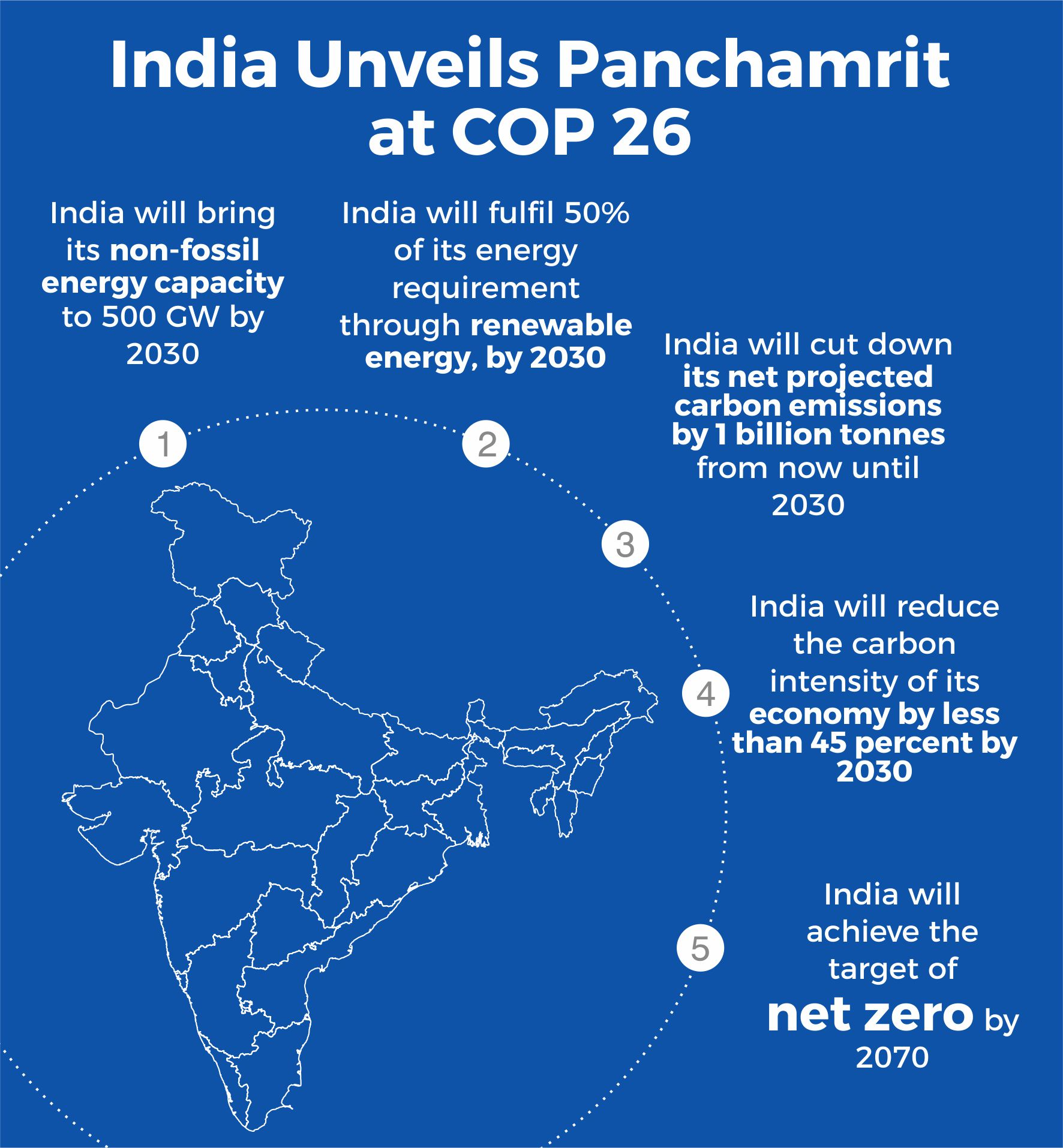 Although India’s relatively low per capita and historical CO2 emissions mean that it carries little historical responsibility for climate change, it is, nonetheless, currently the third-largest emitter of CO2 in the world, mostly due to its substantial demands for energy required to drive economic development.

But India has taken massive strides in climate action—from running one of the largest and most ambitious renewable capacity expansion programs in the world, to spearheading global climate partnerships. Stepping up climate cooperation, India and France launched the International Solar Alliance (ISA) during COP21.

India has always had an important role to play in COP negotiations but at COP26 announced far-reaching ambition on a scale of never before. In response to the urgent need for newer, bolder action, India announced an ambitious five part “Panchamrit” pledge—which are a critical foundation in the global pathway to achieving the ambitious 1.5˚C global warming target.

The goals have been set. But without concrete action, the way forward looks daunting. Practically speaking, India’s commitment of net zero means phasing out coal, which fuels 70 per cent of our electricity, switching to electric vehicles, enabling industries to be more energy efficient, creating forests to absorb carbon dioxide, and installing more solar power plants, all in the next few decades. This is even as India continues on a path of economic growth and urbanisation.

Clearly there is a lot to be done. Much of India’s net zero success also hinges on access to finance.What we need would be strategic planning, scientifically designed policies, and strict implementation of sectoral and thematic priorities. Climate actions will also need to be fast-tracked and supported at the sub-national level. Policy makers have to do their part, but so do CSOs, businesses, private investors, and citizens. Concerted action and collaboration involving the widest possible range of actors is crucial if we want to overcome the toughest climate challenges we face today.

Shakti Sustainable Energy Foundation plays a vital role in supporting this crucial consensus and enabling forward-thinking solutions. Our role is to identify and scale energy system interventions that will reduce GHG emissions to align with a low-carbon future and address the climate crisis.

We use cookies to ensure that we give you the best experience on our website. If you continue to use this site we will assume that you are happy with it.Ok