Greening of Finance at the Sub National Level 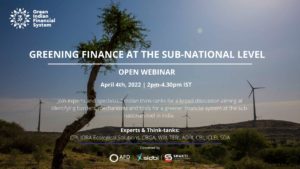 The Green Indian Financial System Initiative, co-convened by the French Development Agency, Shakti Sustainable Energy Foundation and the Small Industries Development Bank of India (SIDBI) is hosting a webinar on ‘Greening of Finance at the Sub-National Level.’

According to the Global Climate Risk Index 2020, India ranked 5th out of 181 countries affected by climate change, implying an extremely high exposure and vulnerability. More than 755 of Indian districts are hotspots for extreme climate events. Government of India recently announced its commitment to reach net zero by 2070 along with intermediate 2030 targets which include increasing non-fossil fuel electricity capacity to 500 GW, meeting 50 per cent of the country’s electricity requirements from renewable energy, reducing carbon emissions by one billion tons, and bringing down the economy’s carbon intensity by 45 per cent. Meeting the ambitious 2030 targets and transitioning the country towards a net zero pathway will require significant effort at both the central and sub-national level.

States play a critical role in undertaking measures and implementing the actions required for change on the ground. Reaching the 2030 targets and eventually net zero will require substantial and immediate action from state governments as well as local actors and civil society organisations. This roundtable will identify barriers to the access green finance by state actors. It will also provide insight into different mechanisms which can be used to leverage capital flows at scale through greening of financial activity.